Trauma, Fear, and Paranoia: Lost and the Culture of 9/11

One of the most popular television shows of the last decade, Lost (2004-2010) confounded many of its viewers with its twisting, convoluted plotlines. This article is an exploration of the many elements of the show over its first few, dynamic years that ultimately weave together to form a subtle, subversive image of post-9/11 American society. Through an examination of specific characters, and the cast as a whole, as well as various distinctly terroristic and apocalyptic components of the show’s plot, Lost is revealed as both a reproduction and a critical re-imagination of the American response to the events of September 11th, 2001. Lost becomes not merely an artifact of post-9/11 American society but a means through which viewers are invited to see ways in which our world can grow and change.

Rachel Aldrich
Rachel Aldrich is a junior in the College of Arts & Sciences majoring in English with minors in Creative Writing, American Studies, and Management and Leadership. The inspiration for her article in Elements came from her work in the American Studies minor. In addition to interning at Post Road magazine, she is a staff member for Stylus, Features editor for The Gavel, and the Music Librarian for the University Chorale of Boston College. After graduating next May, she hopes to continue on to graduate school. 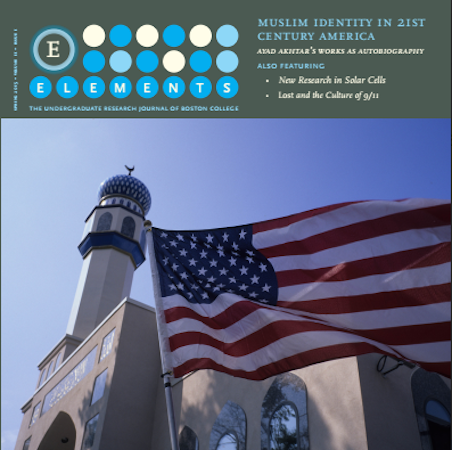